Solving the Problem of Goals and Targets (Part 1) 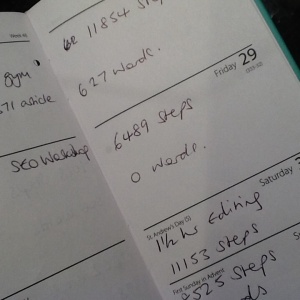 When I first met my publisher, he casually enquired how many words I was writing. That week I’d written around 6,000 words.

“Great! At that rate, you could have a first draft finished in 12 weeks!”

Well, yes I could! And that sudden attainability instigated a new goal of writing 6,000 words a week.

In true perfectionist style, I raced into town to buy a new diary to record my achievements. After several weeks meeting my new target and recording it daily, I felt great. This was the answer to getting a book written!

But then it all seemed to go wrong. I noticed a drop in the quality of my writing as unnecessary adverbs and flowery phrases began to creep in. These simply served the impressive word count but not its readability.

6,000 words had become a goal I simply had to meet or else I was failing. I had dredged my memory and written emotional stuff everyday for several weeks and the inevitable negative focus lead to avoidance of certain topics. Undeterred, I opened new documents and wrote about other stuff and kept going, but at some point ran out of these secondary tasks and was left facing tidying up loose ends and joining bits of story together. I suffer from what Coaching Psychologists call LFT – ‘low frustration tolerance’ – I get bored with this level of detail and procrastinate accordingly! Believing the insight of this, sufficient to keep battling on to get past it, I kept on with beating myself up and squeezing out more words until it began to feel like I didn’t really want to write a book after all!

Then I decided I just needed a day off. I could stand back from the task and have a rest from emotion. I’d be refreshed and able to start again. I did some other stuff and felt better. Because I felt better, I did more other stuff the next day and before I knew it (and there were plenty of genuinely good excuses) I hadn’t written 5 out of 7 days in the week.
What was this goal of 6,000 words doing to me?! In a few weeks it had turned from carrot to stick and negatively affected both the quality and quantity of my writing. Was it my fault? Was I just lacking in the right kind of will power? No, actually, I don’t think so. I’d simply turned a useful target into a goal and then made it my life purpose! Plenty of psychological research shows how having a purpose can greatly improve our happiness but it also has to have meaning.

6,000 words a week is a long way from having the meaning I was after. I want to enjoy my life, (accepting that I may have to do a few frustrating tasks along the way) and I also want to finish writing my book.

Moving forward, I’m going to take a steer from positive psychology and learn to focus on what brings me satisfaction. To achieve that, as well as keeping my writing on track, I need a way of reviewing my efforts so that I can be honest with myself. I’m going to try a kinder way of doing that by recording what I have done rather than what I should do.

There are broadly three things I am going to try next:

I’ll let you know how it’s going in a few weeks time..